Skip to content
We will proceed further from our last post to examine the purpose of Authority. Recall, we previously defined authority simply as a relationship in which Party A entrust Party B with power in exchange for a service. So generally, authority is not entrusted in a vacuum, but always attached with the attendant responsibility to do something. This principle applies whether authority is conferred formally or informally.
Formal authority relates to the transfer or acquisition of power through a formal process, i.e
Informal Authority is not communicated through any formal means, but is largely dependent on factors such as:
Examples include:
In African, as in other similar cultures, the first child has some informal authority based on age and experience, and so in a lot of ways is expected to set the right example through leadership activities for the younger siblings. The exercise of such informal authority, is readily seen as one to direct, protect and ensure order, particularly in the absence of the parents.
So generally, authority is conferred for the purpose of taking responsibility or to render a service. But as fondly stated by the late Dr. Myles Munroe “Where purpose is not known, abuse is inevitable”.
Purpose relates to why; the reason for the creation of a thing. It defines the reason for the existence of any thing or idea.
When a thing is not used for the purpose for which it was created, it is termed an abnormal use, which for short is referred to as an “Abuse”. So we have terms such as drug and domestic  abuse e.t.c.
When authority is not used for the purpose for which it was granted, it will also be termed an abuse. The purpose of entrusting authority must always be to render service.
Individuals in positions of authority must realise that authority was not conferred to dominate others or for self aggrandisement, but indeed to render service.
Nelson Mandela of South Africa is hailed as Africa’s foremost hero because he used his informal and later former authority as President of South Africa to serve his nation.
“The task at hand will not be easy, but you have mandated us to change South Africa from a land in which the majority lived with little hope, to one in which they can live and work with dignity, with a sense of self-esteem and confidence in the future.”
– 10 May 1994. Speech at his inauguration as president 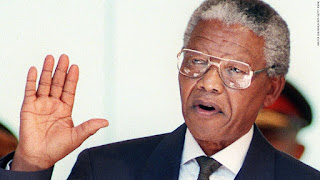 Having authority is one thing, but what is most critical is what you do with it.
kindly share an example of an individual with formal or informal authority who rendered service in pursuance of it.